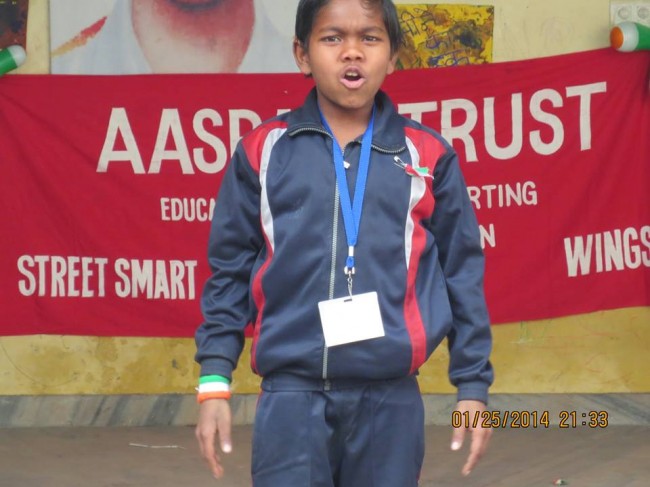 At first glance, Suresh looks like any other child of the street and your eyes would skim over him and move on…..but if you have locked eyes with him, you will not be allowed to move on; his eyes will compel you to stay! Suresh’s eyes are alight with an intelligence, an awareness, confidence, a fire within…they mesmerise and hold you and demand your attention.

Unschooled, unlettered, Suresh 9 or 10 years old, walked into Aasraa with his rag pickers sack in hand.  Four hours & a couple of lessons later he was hooked! Suresh has never missed a day of studying with us & opted to stay at our residential facility rather than accompany his parents for a family event to their native village.

Suresh defines the wisdom of the ancient Chinese seer who observed, “A journey of a thousand miles begins with a single step,” and it is taking that step today. It is beginning today to be the man you want to be.  Suresh is a natural leader – comfortable in his own skin, exhibits great initiative and enterprise, is fearless, not afraid of voicing his opinion and intuitively believes in the philosophy of ‘being today’, instead of becoming a tomorrow that never comes.

As Suresh impatiently waits to start formal schooling at St.Agnes on April 21st, all our prayers and good wishes go out for him. It is children like Suresh that make our constant ‘cha-cha-cha’, worthwhile!